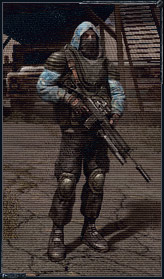 Skiff rose from knee and dropped his gun – strangers were too many. He was surprised to see the color of their camouflage it was blue with white insertions like sky out of Zone.
It was rather disclose for marshes. Stalker thought to himself “Of cause they are not very good fighters but I also made a mistake and let them come to me so close."

Explorers of Zone`s phenomenon, little-known faction which is lost in marshes. Nobody knows surely what their overall strength what are they doing and what purpose they serve. But some rare stalkers who stayed alive after passing the marshes told about guys in the camouflage with sky blue color.