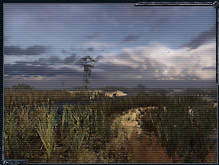 The Zone is a huge abandoned territory, with twenty-year-old dilapidated buildings, overgrown with forests and anomalous vegetation. It is a territory with deserted surface and underground research facilities, neglected military bases and testing grounds for new technologies. The radioactive land is covered with sores of burned out soil, poisonous fogs, and deadly gravitational anomalies. It is a world of a terrible anthropogenic disaster, and in the center of this hell sit the remains of the Chernobyl Nuclear Power Plant. 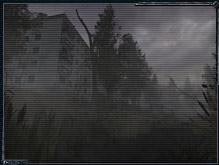 We are trying to recreate the true atmosphere of the real industrial disaster of Chernobyl. You will easily recognize all the sights known from photos of the Exclusion Zone.
The photographs and video records made during our multiple trips into the real Chernobyl Zone gave us the essential background to reconstruct the Exclusion Zone in the game. The architecture and all of the textures you will see are as real as possible.