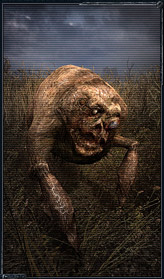 Like many other living organisms when pigs appeared in the Zone they exposed to radiation. Because of genes were touched which controls metabolic process the phenotype of animals was changed.

Mutated pigs which stalkers named "flesh" are one of the illustrative examples of Zone's outrage upon nature. Squamous proffing formed in these creatures and it increased organism ability to regeneration and nerve system was complicated.

Like the normal pig the flesh is omnivorous and when it is hungry can attack stalkers.