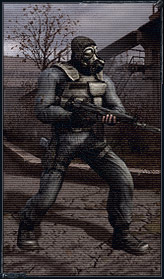 Blue suits were everywhere. They pursued him like pack of wolves their prey. Sch understood it too late.

He looked back and shot and at the same moment dark figure appeared and hollow shot sounded. Stalker fell holding shot wound on the body Pursuers run to him and surrounded

That man who shot in him came to the stalker and sight
- Why?- asked Sch
- Nothing personal. We were hired – the voice from mask answered.
- After the answer shot sounded. Control.

People who can do any task for money. They know little about Zone and its creatures and often they die in such places where rookies smell danger.

As for fighting with people it is hard to find better fighters as they.