Dear players, hardware specialists, overclockers, modders and S.T.A.L.K.E.R. fans! We are happy to present you a special version of S.T.A.L.K.E.R.: Clear Sky designed for testing the performance of your PC!

We all know that S.T.A.L.K.E.R. game fans are able to create game mods but they also proved that they could also develop programs for simple and reliable mods usage. Smart Mod Manager will help you to manage your collection of mods, switch quickly between them, add and remove mods in any order. This program is also capable of merging mods together.

Here is the latest Patch for S.TA.L.K.E.R.: Clear Sky. There is a download for the digital version and the retail version. This update doesn’t have any compatibility problems with the previous patch 1.5.04 and 1.5.05. The complete list of changes you can find here.

In our download section you'll find the brand new patch v1.5.05 for S.T.A.L.K.E.R.: Clear Sky improving both the download and retail versions of the game.
This update doesn’t have any compatibility problems with the previous patch 1.5.04. 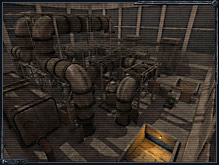 To fans, professionals and all people who like network gaming, we are happy to introduce a new multiplayer map!

The map, called 'Industrial', is a compact location, desigend for a team play of ideally 4x4, though technically allowing the usual up to 32 players online or over LAN.
You are welcome to download and try out the new map in action!

Steam has confirmed that S.T.A.L.K.E.R.: Clear Sky is now available to prepurchase in North America. You can save 10% if you pre-order the game now.

"We are very pleased that S.T.A.L.K.E.R. became so popular among players from all over the world, - said GSC Game World CEO Sergiy Grygorovych. – S.T.A.L.K.E.R. is more than just a game now. Financial success will allow us to develop S.T.A.L.K.E.R. in different directions as a brand."

We are glad to announce that a lot of fresh information about S.T.A.L.K.E.R.: Clear Sky project posted on the official game's site so now you can find some new facts about the ingame Exclusion Zone in the Home, Overview and Zone World sections.

We will try to update these and other sections as often as possible, so keep an eye on the official web site news.

GSC Game World, computer games developer, its publishing subdivision GSC World Publishing and Deep Silver, the games label of Koch Media, a leading producer and distributor of digital entertainment products, today announce a new release date for S.T.A.L.K.E.R.: Clear Sky. The international release date of the game has been set to the 5th September of 2008.

In response to numerous requests, we are happy to announce the official hardware requirements for S.T.A.L.K.E.R.: Clear Sky. Here we go: